Djezzy and Condor are organizing the finals of "Algeria 3G Cup" 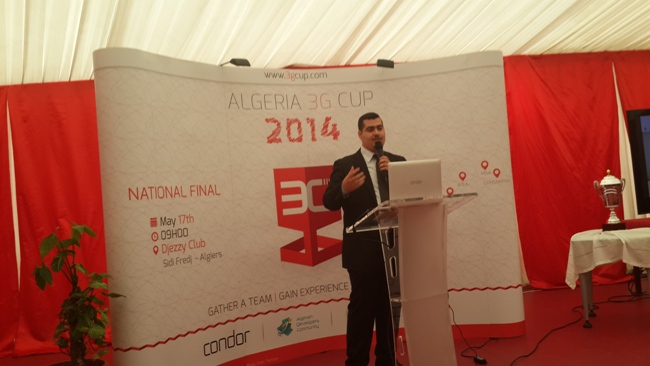 In the framework of the local partnership development, Djezzy and Condor Electronics, two leaders companies in Algeria, each in its field of activity, organize the finals of the competition "Algeria 3G Cup" at Djezzy club in Sidi Fredj. Algeria 3G Cup is a 100 % Algerian initiative launched last February, with the contribution of a group of young Algerian university students members of Google Developers Groups.

This event has for objective to establish an ecosystem which will enclose the developers of new technologies, organize competitions in universities and sponsor IT events organized by start-ups and university clubs.  It will, furthermore, offer internships and fellowships to students as well as training in this area. Currently, not less than 850 students have benefited from training on the development of mobile applications under the Android system coached by 14 Algerians experts who came from the major universities and international firms. The organizers had to select 11 applications among the 41 who have participated in the playoffs. The best applications will be rewarded in the final which will be organized on next May 17th, in order to encourage the young project holders and boost their capabilities in the service of the national economy.
This alliance between Djezzy and Condor Electronics will, no doubt, have beneficial effects on the development of the NICTS sector, already at the cutting edge of innovation in our country.